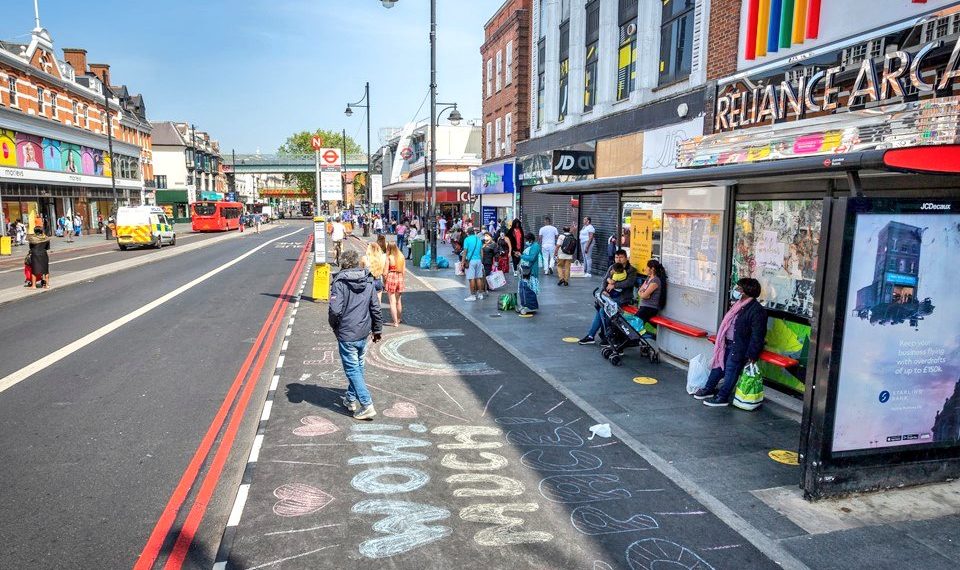 Image by Transport for London

Today is the deadline to apply for the Emergency Active Travel Fund from the Department for Transport. This is the funding announced on the 9th of May, which told local authorities “to reallocate road space for significantly-increased numbers of cyclists and pedestrians.”

We understand that both Nottingham City Council and Nottinghamshire County Council are working on bids but we don’t know what specific schemes they are proposing. 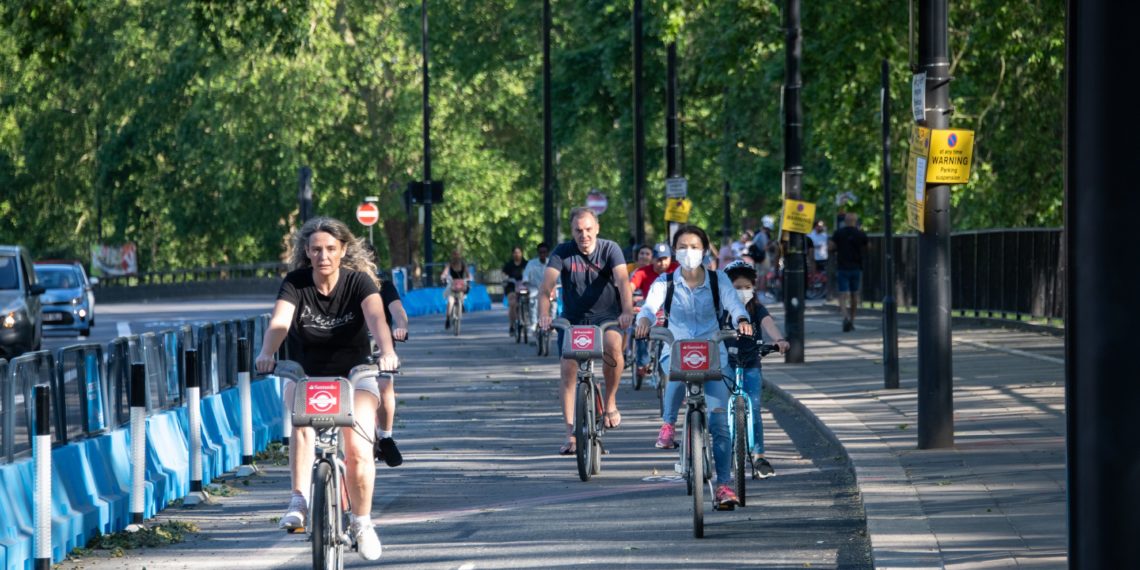 Photo by Transport for London

What can the money be used for?

The money isn’t guaranteed, and the criteria are in fact very tricky, written in a way that looks like they’re intended to prevent unambitious ‘business as usual’ schemes or spending money on lots of minor bits and bobs here and there. This was spelled out in a letter from Deputy Director at the Department for Transport, Rupert Furness which includes the following paragraph –

“To receive any money under this or future tranches, you will need to show us that you have swift and meaningful plans to reallocate road space to cyclists and pedestrians, including on strategic corridors. Anything that does not meaningfully alter the status quo on the road will not be funded.”

Schemes also have to be –

“Deliverable quickly (in next 4-12 weeks) and without extensive consultation and design.”

“cycling as a replacement for journeys previously made by public transport”

measures that can be delivered quickly using temporary materials (e.g. barriers and planters), such as:

How much is it?

The money will be awarded in two phases (assuming the bid is successful).

The amount of money allocated to each transport authority has been decided by a formula based on census data (the number of residents aged 16 and over in employment who use public transport as their usual method of travel to work).

The Phase 2 money is intended to be used to make trial schemes implemented during phase 1 permanent.

“The second tranche will be released later in the summer to enable authorities to install further, more permanent  measures to cement cycling and walking habits. Where applicable, this will enable local authorities to implement schemes already planned in Local Cycling and Walking Infrastructure Plans (LCWIPs).”

What are other places in the UK doing?

Lots of places have pushed ahead with low cost walking and cycling measures in response to Covid-19, leaving those hanging back and waiting for DFT funding looking slow on the uptake. (Presumably they are funding their trial infrastructure using their existing budget for managing their road network.)
Useful list of schemes happening around the UK in this Road Danger Reduction Forum blog post 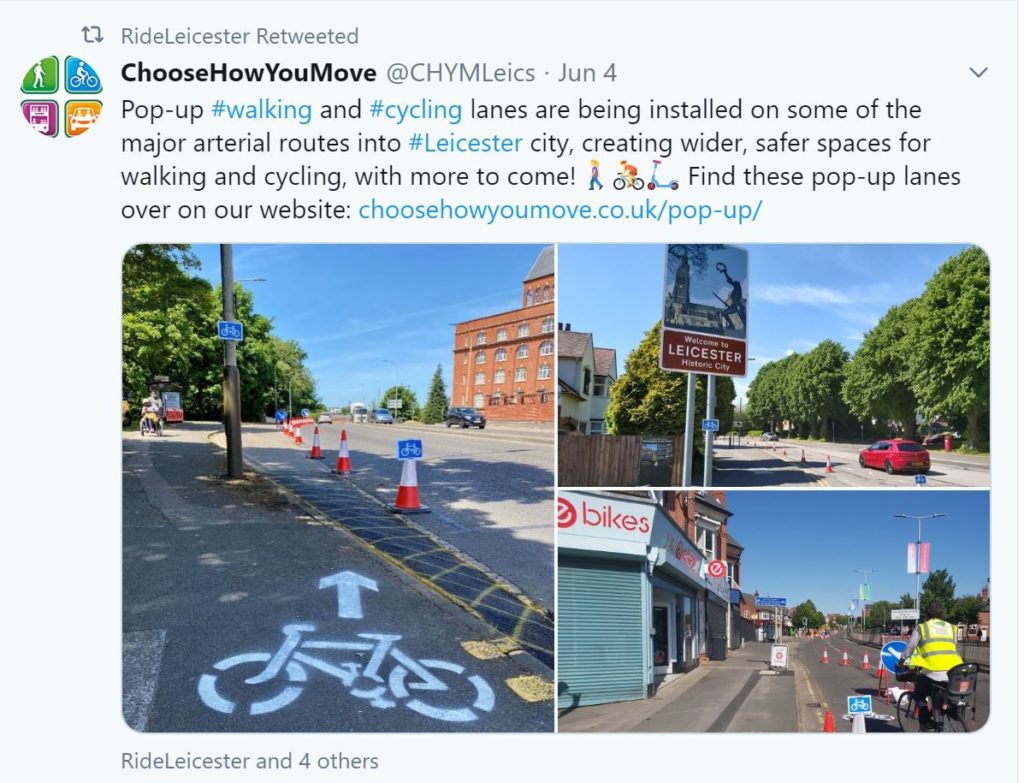 Can transport authorities get progressive enough plans together in time? Let alone deliver them in a matter of weeks. It may be that places who were doing good stuff anyway are able to forge ahead (because they already had lists of good ideas to pick from, even if they didn’t know how they were going to fund them). Places which haven’t prioritised walking and cycling in any meaningful way (occassional lick of paint or ASL type stuff) may really struggle.

“The truth is that while some cities and larger towns were, by and large, moving in the right direction on active travel, most of the rest of the country now has a long history of stagnation or even decline when it comes to levels of walking and cycling. Coronavirus may serve to accelerate these trends, with car-dependent places becoming even more car-dependent, and (fingers crossed) cities in particular seeing further shifts away from private car use. As I write this, some councils are doing an amazing job, rapidly developing and implementing programmes of pop-up cycle lanes on main roads and low-traffic neighbourhoods. Others are sitting on their hands, waiting for cash to be handed to them from central government before they do anything (cash they may not get), while others are showing absolutely no interest whatsoever, or even being overtly hostile  to the notion of enable walking and cycling.”

“The flip-side of this optimistic outlook is that the places that where public transport use is light, or negligible – places which are very car-dependent – may see that car dependence entrenched, at least in the short term. This is simply because the ‘business as usual’, driving-everywhere pattern of mobility in these locations, while harmful in many different ways, is not a pressing issue when considered strictly in terms of the spread of coronavirus.” 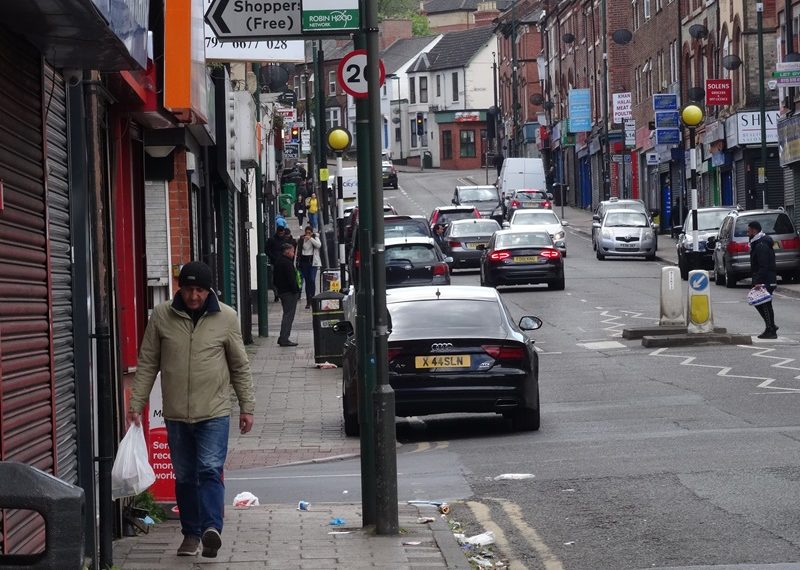 Political will is particularly key during an emergency situation, showing leadership to tell people why measures are necessary, build support and counteract backlash. While we know Nottingham City Council has good intentions, they have been slow to announce anything publicly, meaning the pressure is really on and their plans will be closely scrutinised when they are announced. Nottinghamshire County Council have been silent and not engaged at all politically, so it remains to be seen whether they will be able to develop ambitious enough plans within the limited time and actually deliver them without any apparent political will. 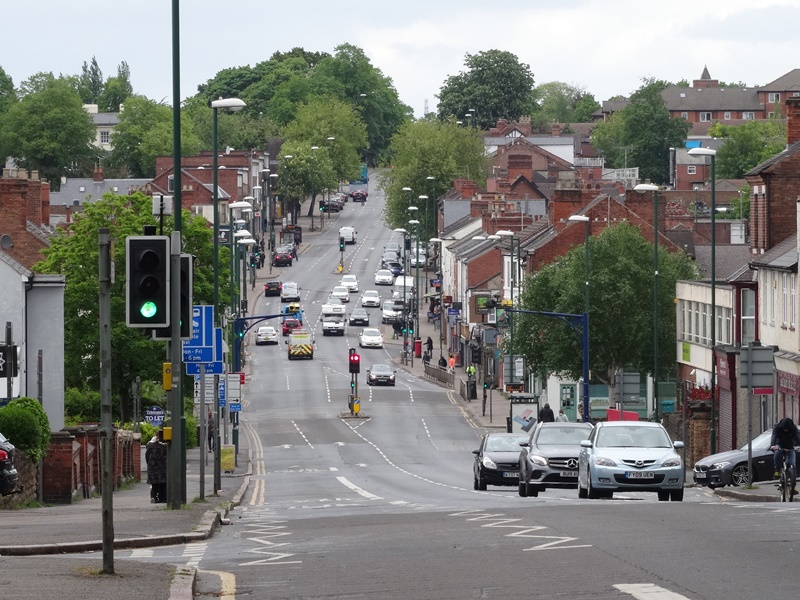 Mansfield Road: All. That. Space. (Photo by Karen Fry)