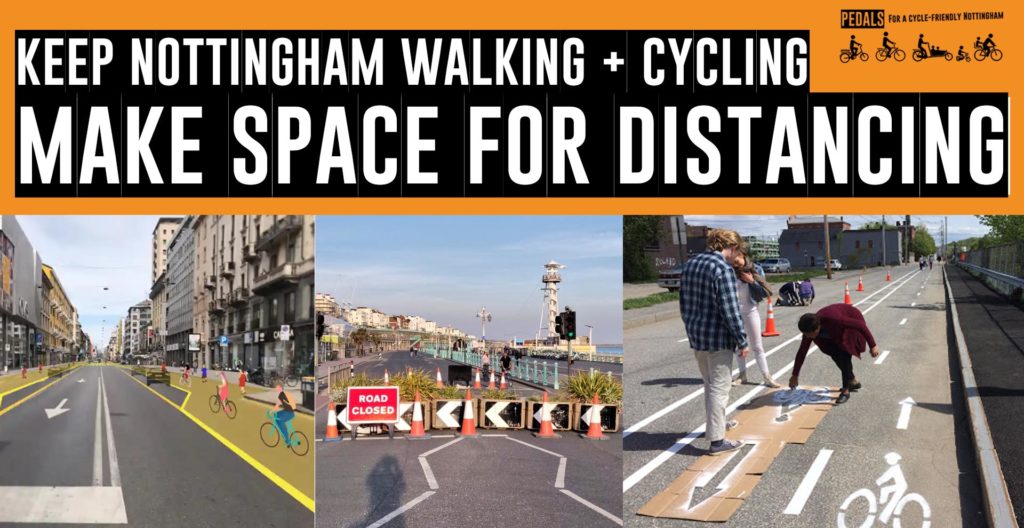 Lots of you have been asking for an update on any plans for improved walking and cycling infrastructure in Nottingham and Nottinghamshire in response to Covid-19. Specifically, following the Government announcing emergency funding and telling local authorities to “to reallocate road space for significantly-increased numbers of cyclists and pedestrians” on 9th May [link].

Thanks to everyone who wrote to their councillors to ask them to make more space for people cycling and walking to keep people safe and avoid future transport chaos.

In places which are forging ahead, announcing plans and getting things built, that change seems to be driven by politicians taking ownership. So, we were keen to hear from elected politicians, rather than officers (council employees). Pedals wrote to the political leaders and Transport portfolio holders of both Nottingham City Council and Nottinghamshire County Council (the two local authorities which are responsible for transport).

On Thursday 28th May, we had a positive meeting with Cllr Adele Williams, Portfolio Holder for Transport and Adult Care. We wanted to make the case for taking action quickly, as other cities have done, before the opportunity to influence behaviour is missed. We stressed the need for Nottingham to make a statement and align itself with other progressive cities which are getting plans announced and built.

We’ve been told that there are “bold” and “transformational” plans coming together and to expect an announcement soon. It was a useful and encouraging meeting, though obviously we want to see things happening sooner rather than later. It feels like things are coming to a crunch point with non-essential shops being allowed to reopen from June 15th, meaning more people will be making more journeys, the roads will be busier roads and the paths more crowded. We need to avoid a situation where people who’ve started cycling during lockdown are scared off the roads by returning motor traffic.

We have not received a response to our email, and subsequent follow-up email. A shame, as we were hoping for some positive political leadership on this, as this has been key in places doing good stuff.

We have been told via the Cycling and Walking Advisory Group that Nottinghamshire County Council “have a working party considering possible measures for short-, medium- and longer-term implementation.” and heard from supporters that they have been directed to submit suggestions using an online form.

We are working on a Pedals’ response based on revised guidance from the Department for Transport.