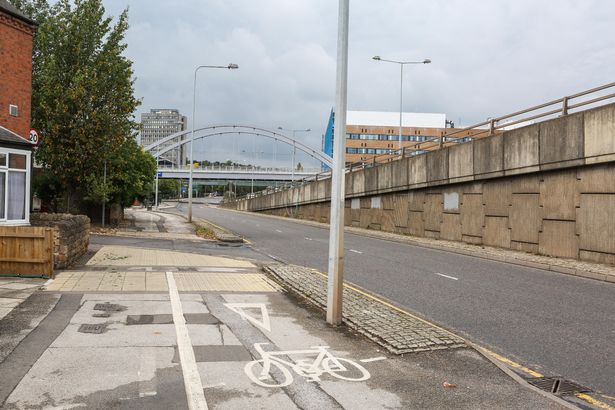 Shared use route alongside the A52 Clifton Boulevard, looking towards the QMC

The proposed improvements for this section of pedestrian and cycle path, apparently one of the busiest on Highways England’s roads in the East Midlands, were discussed at a Pedals monthly meeting early in 2018 with Dale Swain and Mark Roxburgh from Highways England who are responsible for trunk roads.

We have long been keen to see this path upgraded, particularly as it was actually made narrower during the works to rebuild the nearby Dunkirk Flyover in about 1989-90! To add insult to injury that scheme at first included widening part of the nearby carriageway with a hatched area that in practice seemed of little use to drivers! (This was removed when the Ningbo Friendship Bridge to carry the NET line to Chilwell and Toton was built about 5-6 years ago).

This section of the Ring Road cycle paths is a key route to access Nottingham University (University Park) and the Queens Medical Centre (QMC). Once upgraded, this will also be part of Nottingham’s key cycle routes, connecting with the City Council’s Western Cycle Corridor between the City Centre and the Beeston end of University Boulevard, completed in 2016.

Highways England agreed that the current layout does not meet the latest standards and to bring this route up to modern standards to make it easier for cyclists and pedestrians to use, particularly with more space and better use of space. We welcomed this commitment but urged that it should reflect the higher standards used in some of the City Council’s recent schemes, such as the Western and Eastern Cycle Corridors with cycle priority crossings at side roads, marked by green surfaces.

Highways England did agree to consider this. However, after extensive internal consultation and a comprehensive Road Safety Audit they decided in September 2019, very disappointingly, that they could not justify this on safety grounds, whatever the merits of using consistent standards to those on the newer City cycle schemes, as both Pedals and the City Council had argued. We can understand that there were particular reasons why cycle priority could not be justified on the QMC slip roads, in the interests of avoiding obstructing speeding ambulances, but not on the other side roads such as Ednaston Road, Highfield Road and Science Road.

The scheme proposes unsegregated shared paths rather than separate paths with clear segregation between cyclists and pedestrians that we think should be the norm on busier shared paths.

By contrast, a particularly welcome feature of the proposals is that they include arrangements for contraflow cycling by the main campus exit for motor vehicles on to Clifton Boulevard just south of the Derby Road underpass and roundabout. We have been campaigning for this change for many years, to make it more convenient for cyclists riding up the hill and wish to turn in to access the north-east part of the University Park campus.

When work will start is still not clear but this scheme is intended to connect with the Highways England Safety Scheme on the Derby Road section of the A52 between the QMC and Sherwin Arms roundabout. This is being developed in response to a problem of accidents involving pedestrians crossing this stretch of road but should include a continuous shared path on one side of the road, at least. Other details of this are still awaited.