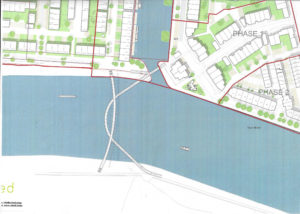 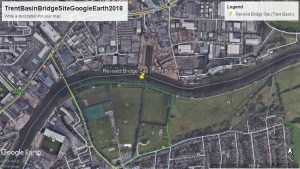 Pictures show the bridge site from the south bank looking north towards the entrance to Trent Basin housing site.

Since 2014 Pedals and 4 other local groups have been working on plans for a new foot-cycle bridge on the east side of Nottingham, east of both Trent Bridge and Lady Bay bridge, and with many connections to a variety of important existing and proposed upgraded and new routes, including the riverside paths, on both sides of the Trent. These include the Trent Valley Way and Route 15 of the Sustrans National Cycle Network south of the river, and many other local cycle paths, bridleways and footpaths.

It would provide an equivalent attraction in this area to the very popular Suspension Bridge west of Trent Bridge, between the Victoria Embankment and Welbeck /road, West Bridgford. It would provide a much safer and more attractive link between many leisure attractions, including Colwick Park, Colwick Woods and Sneinton Greenway north of the river, and Holme Pierrepont Water Sports Centre and Country Park, as well as the Grantham Canal and Skylarks Nature Reserve south of the river.

For walkers, cyclists and runners it would open up many new opportunities for both linear and circular routes, in combination with other bridges such as the Suspension Bridge and the Wilford Bridge and Clifton Bridge shared paths.

With both new and improved connections, including to and from the City Centre via the new Eastern Cycle Corridor on Daleside Road and Manvers Street, etc., it would also provide a much safer, more pleasant and less polluted route for commuters across the Trent in this area, on foot and by bike, particularly for people living in both the existing and many new proposed housing areas on both sides of the river, and particularly in the Gamston / Bassingfield and Tollerton areas on the east side of West Bridgford.

Like the Suspension Bridge the proposed new bridge would provide a major landmark for the very attractive riverside environment through Nottingham and also be a major landmark in the emerging Waterside Regeneration area between Trent Bridge and Colwick Park, boosting the overall image of the area.

After detailed consideration of various exact sites, the one we now favour as best in overall terms, is about 1km downstream of Trent Bridge, with a north bank landing just west of the entrance to Trent Basin itself. This would also connect to the proposed north bank riverside path extension from Meadow Lane lock to and from Colwick Park.

The south bank landing would make use of the scrub land at the back of the football and rugby grounds, near Lady Bay, with ramps to and from the section of riverside path between The Hook and Lady Bay bridge.

We already have the support in principle of nearly 20 other local groups, as well as many individuals. The groups include:

Our work has already included the preparation of a feasibility study, to argue in detail the case for such a bridge, and at this particular location, and has also included the commissioning of an economic impact study from the Sustrans Research and Monitoring Unit.

As a result, since November 2017, we have the support in principle of the Leader of Nottingham City Council, Cllr. Jon Collins and we are now in the process of obtaining similar support from the Leaders of Nottinghamshire County Council and Rushcliffe Borough Council, as well as other relevant agencies such as the Environment Agency and the Canal and River Trust.

We also have made several initiatives to sound out potential funding for the bridge, particularly through the current process of producing an LCWIP (Local Cycling and Walking Infrastructure Plan) for the D2N2 (Nottinghamshire and Derbyshire) area being carried out on behalf of the Department for Transport by a team from Sustrans and PJA (Phil Jones Associates) of Birmingham, arguing in detail that this bridge is the key missing link in the local cycling and walking network for the Greater Nottingham area.

The results of this LCWIP exercise, intended to produce agreement on a network of cycling and walking routes for the next 10 years, with short and medium as well as longer-term priorities, are expected early in 2019. This will also help our further development of detailed design options for the bridge and its approaches.

Getting general acceptance of the case for the bridge, and funding from different sources, is a long and tortuous process, and its inclusion in this LCWIP, would be a big step forward towards this goal. 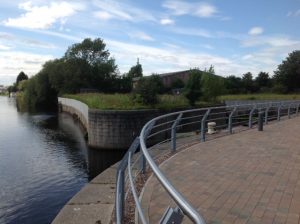 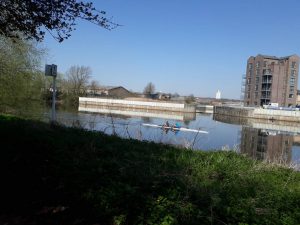 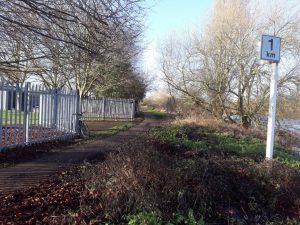 [Previous post on proposed foot/cycle bridge over the Trent]